There are a variety of characters who are angels in my Kingdom Come Series.

Here is a list of the types of angels along with their descriptions and roles!

Virtues are spirits of motion who control the elements and govern nature. They have control over seasons, stars, the moon, and the sun. They are also in charge of miracles and provide courage, grace, and valor. Miracles and signs in the world are made through these angels.

There are no Virtues named in When Ash Rains Down, but they are called upon when Nicholas, a Warrior Angel known as a Power, tries to test the focus of Julia while training her to fight soul-siphoning demons.

Dominions are angels of leadership who regulate the duties of angels lower than themselves. They rarely make themselves known to human beings, but when they do, they look like divinely beautiful humans with golden orbs, feathered wings, and scepters.

In When Ash Rains Down, Nicholas is closest to this type of angel. He’s a combination Dominion and Power. He only shows himself to Julia, his half-human, half-angel charge, once he’s ready to tell her who—or rather what—she really is, so that he can convince her to fight demons. (Which will be no easy feat!) Nicholas is definitely beautiful, but he struggles. He’s torn between being a selfless rule-follower and wanting to do his duties to gain rank in the Archangel Michael’s army.

Most of the angels in When Ash Rains Down wear the feathered wings of the Dominion angels and wield orbs of light fastened to the heads of their spears or on the pommel of their swords.

Powers are angels of darkness, warrior angels who guard the cosmos and humans against evil. They dress as soldiers, wearing full armor, a helmet, and carry shields, spears, and chains. They fight against evil spirits who attempt to wreak chaos through human beings. They also supervise movement of heavenly bodies to ensure the cosmos remains in order. They cast evil spirits into detention spaces. They are also bearers of conscience and keepers of history. They oversee the distribution of power among humans. They decide how to execute commands and direct lower angels on how to order creation.

In When Ash Rains Down, Nicholas—the infuriating boy who tries to persuade Julia to fight against demons—is a Power. He’s brooding and severe. He feels most at home when on the battlefield, spear in hand, guarding souls against Lucifer’s demons. This is why he is charged with being Julia’s Warrior Trainer. He’s a Traditionalist and dislikes when anyone–other spirits or humans—break rules. He butts heads with Cole, Julia’s Guardian Angel, on how to best look out for her safety.

Archangels are the chief, leading angels. They deliver messages of critical importance. They are protectors and leaders of the forces of heaven against Lucifer and his demonic armies. They guard nations and are concerned with the issues and events surrounding these, including politics, military matters, commerce, and trade.

In When Ash Rains Down, Michael the Archangel is the leader of all the angels and the army of God. He has four main responsibilities, first and foremost is to combat Lucifer. He is the angel in charge of Nicholas and the other Warrior Angels, including Julia should she choose to take up her sword to fight demons alongside the other angels.

Principalities guide and protect nations, groups of people, and institutions. They preside over the bands of angels and charge them with fulfilling duties of divine ministry. Some administer and some assist. They wear crowns and carry scepters. They carry out orders given to them by the Dominions. They bequeath blessings to humans. They oversee groups of humans. They are educators and guardians of earth. They inspire living things in areas of art and science. They collaborate in power and authority with the Powers. They are the leaders of the lowest choir of angels. They direct the implementation of God’s will.

The closest character to being a Principality in When Ash Rains Down…is a secret. He’s an educator, but also plays the role of a mentor and healer in Julia’s life. See if you can spot him as you read the novel!

In addition, when Julia’s Guardian and Warrior Trainer, Nicholas, saves her from swarms of demons outside a hospital, he mentions that her family inside is protected, while she, on the outside, is not. It’s these angels, the Principalities, that he is referring to, as they are charged with protecting institutions on earth. 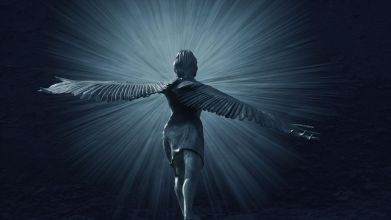 Angels and Guardian Angels deliver human prayers to God and also God’s answers and messages to humans. They have access to all other angels at all times. They are the most caring and social and will assist anyone who asks for help. They are the most concerned with the affairs of all living things. They are messengers and caregivers. They execute and carry out the will of God. These angels are the ones who most communicate with humans. Some are assigned to be personal guardians of human beings. Each human being on earth is assigned a personal guardian.

In When Ash Rains Down, Cole is Julia’s Guardian Angel. He enjoys socializing at her school and making Julia smile. Her happiness and well-being are of his utmost concern.

Of course, since he became human to guard her more closely due to her…special situation, there are complications which lead to him causing her more distress than he’d like. So while Cole may not be the perfect Guardian, the real thing always has your best interest in mind.

So…what are your thoughts on angels and the angels in my series? Want to find out which angel you’re most like? Take this quiz and discover your angelic side!

Information on angels taken from the following sites on the nine choirs of angels: