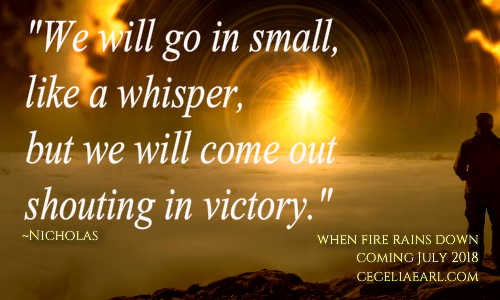 “With so many Guardians in captivity, we cannot simply sneak them out. Our breakout will be catastrophic. It will be an upset. We will go in small, like a whisper, but we will come out shouting in victory.” Nicholas pounds on the table, a jolting sound in the echoing cave. “Who is with me?”

(I love the chapter I’m currently writing (excerpt above) but it’s time to end it. In fact, I took a time out from it to write a pre-romantic scenes, but will return to finish it once I publish this post. Nicholas is one of my favorite characters. I love his strength and determination. He’s a little (okay, a lot) rigid, but I think we’ll see him soften up a couple of times in When Fire Rains Down!)

With a crazy deadline looming, I’m writing away, getting words down whenever I have a spare minute. Then I reread and revise chapters at a time before getting another couple thousand words in. I’m behind, like always. It’s why I set a date with my editor when I did.

I now know that I am not productive without a deadline. I plan to schedule myself out for the next two to three years so that I can hold myself accountable. But also, so I can book things like reviews and blog tours way in advance. I’m looking forward to my next couple of years as an author and publisher, but right now, I’m a bit panicked because this novel is way overdue and though I’m rushing now, I want it to be better than perfect for the ending to this series. It’s been planned out for forever now, and I have a paragraph summary for nearly every chapter written from beginning to end, but now it’s a matter of getting through this freaked-out mindset I’ve got going on and finish, hopefully in the next two weeks, so I can have a couple beta readers and critque partners get their eyes on it before sending it to my editor June 18. (Anyone a fast reader and want to beta read a draft for me?)

I’ll be announcing an official sign up (June) for sending out review copies (end of June/early July) but do let me know if you happen to read this and are interested in receiving a copy for reviewing (I’ll need reviews July 27 and into August and September after it’s released!)

I’ll also be announcing fun details about a Facebook party, cover reveal, giveaways, and whatnot soon (June) and will be on the lookout for bloggers and booktubers to review, interview, and help me out during my release week! Interested? Let me know. Official blog posts and invites going out soon.

Right now, I’m writing in a hotel room a couple hours from home. My middle son is playing in a baseball tournament and he had two early games today which freed up the afternoon so I could get a run in and write a couple thousand words. We’re also taking some time to swim and play board games. It’s cloudy and cool, so it ended up being a nice afternoon/evening to be indoors anyway.

(And if you’re a blogger/reviewer/booktuber who enjoys young adult angel fantasy, then let me know if you’d like review copies of any of my books. And if you’re available the week of July 27 to participate in a blog tour (reviews, interview, promo posts, whatever you’d like). Official info and sign up coming soon.) Comment below or email me author@ceceliaearl.com 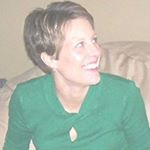