WWW Wednesday is hosted by Sam @ Taking on a World of Words! All you have to do is answers the following three questions:

I just started reading this one. It switches back and forth between present and past, so it’ll be a different read. I’m excited to dive into the world Swanson created!

All her life Fern has been told she is blind to reality—but, what if she is the only one who can truly see?

Fern Johnson is crazy. At least, that’s what the doctors have claimed since her childhood. Now nineteen, and one step away from a psych ward, Fern struggles to survive in bustling Los Angeles. Desperate to appear normal, she represses the young man flickering at the edge of her awareness—a blond warrior only she can see.

Tristan was Fern’s childhood imaginary hero, saving her from monsters under her bed and outside her walls. As she grew up and his secret world continued to bleed into hers, however, it only caused catastrophe. But, when the city is rocked by the unexplainable, Fern is forced to consider the possibility that this young man is not a hallucination after all—and that the creature who decimated his world may be coming for hers. 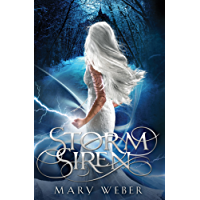 This one sucked me in and yet at times I had to set it down and walk away from it. Parts of it were dark and emotional and I needed a break. The language was beautiful and the world was intriguing– a mixture of dystopian and fantastical, though I think the magical portions were just touched upon. I look forward to seeing more of the magic–the siren–in the next installment.

As a slave in the war-weary kingdom of Faelen, seventeen-year-old Nym isn’t merely devoid of rights, her Elemental kind are only born male and always killed at birth–meaning, she shouldn’t even exist.

Standing on the auction block beneath smoke-drenched mountains, Nym faces her fifteenth sell. But when her hood is removed and her storm-summoning killing curse revealed, Nym is snatched up by a court advisor and given a choice: be trained as the weapon Faelen needs to win the war or be killed.

Choosing the former, Nym is unleashed into a world of politics, bizarre parties, and rumors of an evil more sinister than she’s being prepared to fight . . . not to mention the trainer whose dark secrets lie behind a mysterious ability to calm every lightning strike she summons.

But what if she doesn’t want to be the weapon they’ve all been waiting for? Set in a beautifully eclectic world of suspicion, super abilities, and monsters, Storm Siren is a story of power. And whoever controls that power will win.

WHAT I’LL READ NEXT 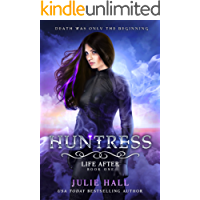 I’ve wanted to read this one for a while. It’s spiritual warfare, the same genre my current series is, so I can’t wait to find out How hall creates her world.

Death was only the beginning.

No one’s afterlife is as dispiriting as Audrey’s–at least that’s what she believes after waking up dead without her memories and being promptly assigned to hunt demons for the rest of eternity.

She’s convinced there’s been a cosmic mistake; after all, she’d rather discuss the color of her nails than break them on angelic weapons. It doesn’t help that her trainer, Logan, is as infuriating as he is attractive.

When an ancient weapon of unparalleled power chooses Audrey as its wielder, attracting the cautious gazes of her fellow hunters and the attention of Satan himself, Logan is the only one she can trust. With Satan’s eyes now fixed on Audrey, a battle for the safety of the living looms in the shadows.

ps my shift appears to be broken so im unable to capitalize… any ideas what’s wrong with my laptop? how annoying!